Shopping Cart
Your Cart is Empty
Quantity:
Subtotal
Taxes
Shipping
Total
There was an error with PayPalClick here to try again

Thank you for your business!You should be receiving an order confirmation from Paypal shortly.Exit Shopping Cart

We all know that olive oil is extremely tasty and extremely good for you especially when it’s compared to other forms of oil but fewer people will be aware of the ozonated form of olive oil.

WHAT IS OZONATED OLIVE OIL?

Ozonated olive oil was apparently discovered quite accidentally during the early years of the 20th century when tuberculosis was commonly treated by breathing in ozone through an oil.

Following a number of treatments, the oil used turned into a gel which held onto the ozone for a prolonged period of time. This made the oil an excellent healing salve which was used for various health problems.

In 1904 Nikola Tesla became the first person to market ozonated oil and pharmacies across the world started selling it under its commercial name ‘Glycozone’.

Of course, the word ozone these days has negative connotations. We associate it with increasing ozone levels and pollution but the ozone itself is not to blame rather it is the pollutants getting caught inside the ozone.

The ozone actually helps to cleanse the air and although the gas alone is considered toxic and damaging to lung tissue when inhaled, when it is used more selectively it offers some significant benefits.

Ozone therapy has been popular around Europe for many decades where it is used to treat numerous ailments ranging from strokes to dermatitis. In the US, its use as a medical treatment varies between states but it appears to be increasing in popularity while ozonated oils have been researched fairly extensively.

HOW IS OZONATED OIL MADE?

It is produced by using very high quality, cold pressed virgin olive oil which is put through a manufacturing process referred to as ‘ozone injection’. This process involves bubbling the ozone into the oil for a fairly extended period until it is ready for use.

Some companies are known to use a low quality ozone generator which may cause contamination of the oil. For the best quality and most pure form of ozonated olive oil, you should ensure that it was produced with a cold plasma generator rather than a corona generator.

Ozonated olive oil is most commonly used for the skin. It can be applied directly to the skin in exactly the same way that you would use a skin cream or salve.

It has properties that can help stimulate regeneration of skin cells while also being able to sterilize and clean wounds. Ozonated olive oil can also reduce inflammation, ease irritation and speed up healing.

OZONATED OLIVE OIL FOR THE SKIN

As we have mentioned, ozonated olive oil is mostly used to support healthy skin and treat a wide variety of skin conditions.

1) FOR ACNE AND ECZEMA

As a topical massage paste, the ozonated oil acts as a natural antioxidant which allows for toxins and lactic acid to be released from your pores which cleanses the skin and helps get rid of dirt and bacteria.

This and its antibacterial qualities makes it a useful natural treatment for acne while it is also used effectively to treat many chronic skin conditions such as eczema and psoriasis. As well as its ability to cleanse the skin, ozonated olive oil helps ease irritation and reduce redness and swelling of the skin.

Because of its antioxidant actions, ozonated olive oil can also be used to eradicate some of the signs of aging like wrinkles and diminish the appearance of age spots.

OTHER USES FOR THE SKIN INCLUDE:

To reduce the appearance of scars and stretch marks

To treat infections of the sweat glands

Yeast infections of the skin

To break down cellulite

3) OZONATED OLIVE OIL FOR THE TEETH

I would never have thought that olive oil was good for your teeth but if you are one of those people who would prefer to avoid those trips to the dentist, ozonated olive oil may be just what you need.

A study published in 2012 investigated the use of ozonated olive oil to treat certain periodontal conditions in 20 subjects. They found that when ozonated olive oil was used as an adjunctive treatment to root planning or scaling it resulted in significant improvements for the participants who used it. (1)

Experts recommend that you apply it to your gums with a cotton swab or a toothpick or even add a few drops to your toothbrush to brush your teeth with.

There is no scientific evidence that ozonated olive oil can work as a long term solution for herpes but the internet is awash with anecdotal reports that it is an extremely effective short term treatment.

For cold sores, apply the ozonated oil to the affected area 3 times a day until your sores have subsided.

If you suffer from Athletes foot or nail fungus, then ozonated olive oil may help.

First soak the feet in the bath or a bowl for ten minutes or so and then dry your feet making sure that you attend to the areas between your toes.

Once they are dried properly, apply your ozonated oil around the affected areas of your feet and toes.

Repeat the process several times a week for at least 3 weeks even after the condition has improved.

If your muscles are sore and aching after a hard day on your feet or an intense workout session, you can rub your ozonated olive oil into your sore muscles to help ease the pain.

A recent study conducted on guinea pigs found that animals treated with ozonated olive oil experienced significant recovery in their wounds compared to animals in the non-ozone group. The researchers concluded that ozonated oil could be used to enhance skin wound healing. (2)

Ozonated olive oil is a safe and natural treatment for your baby’s diaper rash. It contains none of the harmful chemicals found in some over the counter creams and should help ease your baby’s discomfort and ease any swelling or skin wounds.

Ozonated olive oil is regarded as one of the best natural treatments for painful hemorrhoids. It has soothing qualities and anti-inflammatory properties that will help relieve the pain and heal any breakage in the skin.

It may sound odd but a dab of ozonated olive oil under the armpits can help you smell fresher for longer.

To use it as a deodorant, simply apply it under your arms and anywhere else that is prone to sweat and body odor.

It will help to oxidize the bacteria which leads to body odor.

Try it out and let us know if it works.

An ozonated olive oil paste is produced by extending the injection or bubbling period to three weeks. This process is far more extensive and results in a paste with far greater oxygen levels and ozone saturation than the more common form.

When you massage it into your body, you absorb the ozonide into the tissues which results in the body’s toxins and lactic acid becoming oxidized. It has all the same skin benefits that regular ozonated olive oil has but the effects are even greater.

There are no adverse side effects associated with the topical use of ozonated olive oil. 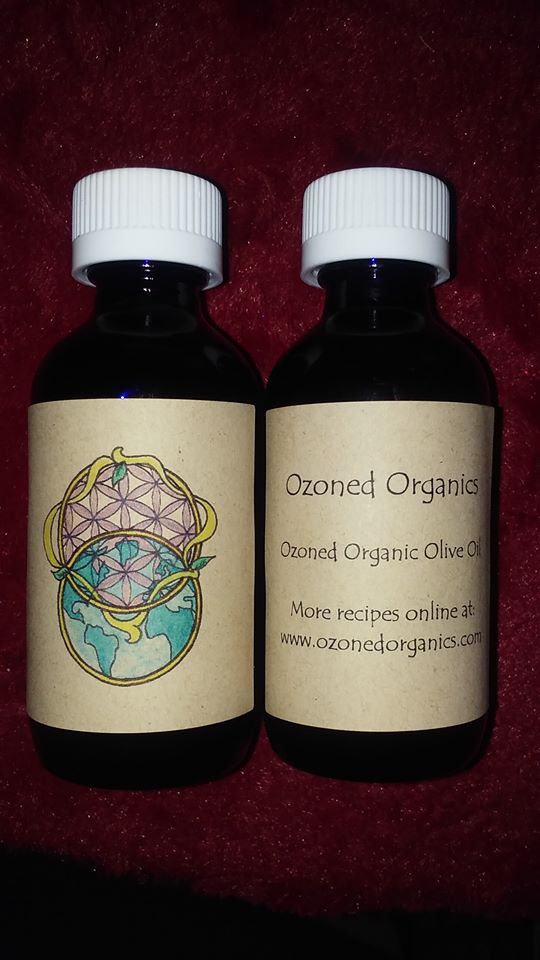